A set of wrappers for Browser native as well as RxJS functions to avoid unnecessary change detection and zone interference in Angular.

@rx-angular/cdk/zone-less is designed to help developers improve performance by not using zone.js patched API's. Besides a well documented and typed API it provides a way to use patched API's in a way that is independent of ngZone runOutsideZone usage.

By default, Angular or better say zone.js patches most of the asynchronous APIs of the Browser. This adds additional overhead on those APIs and even more important, this leads to unnecessary renderings of the Angular component tree, also known as overrendering.

Until now developers were only able to either disable zone.js completely or wrap another logic around the patched APIs to avoid change detection calls. This of course requires injecting another service and also makes your code more cluttery and slow.

The zone-less package helps out here. It provides a general method to access the unpatched version of an API and also ships a set of commonly used APIs of the Browser as well as RxJS. All those APIs are entirely independent of zone.js and NgZone (normally used to run things outside Angular).

The way how zone.js works is, it patches all relevant async APIs of the Browser. This happens early on as zone.js is treated as polyfill. 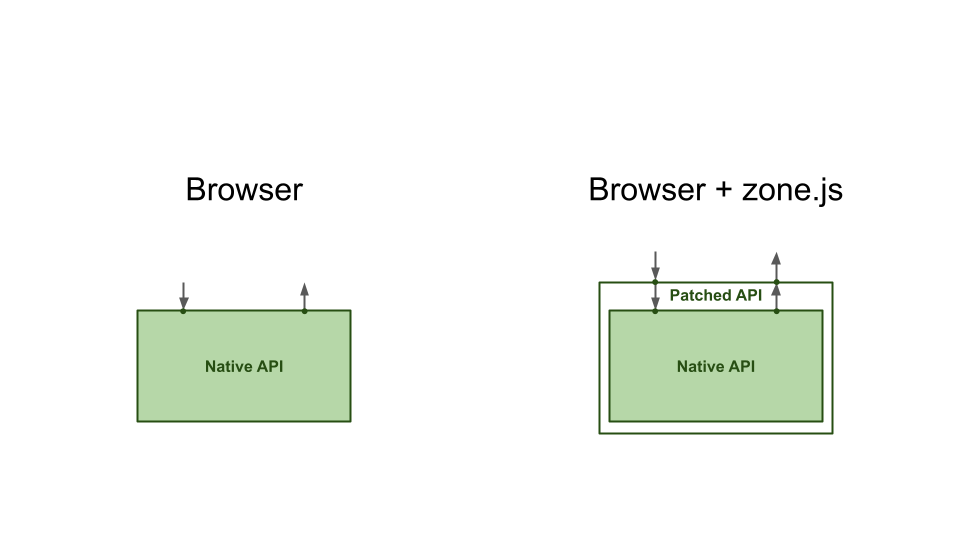 All original logic of the patched API's is stored under a symbol in window. You can check that by logging for example the following value: console.log(window.__zone_symbol__setTimeout). This will print the original unpatched API to the Browsers console.

The utils folder contains the most essential functions used to unpatch APIs. Normally if developers want to avoid change detection through zone they have to inject NgZone and run the code that should not trigger change detection in the runOutsideAngular method.

This introduces some lines of code and also takes time to retrieve the service from dependency injection and execute additional code.

The getZoneUnPatchedApi function is used in all other functions of the zone-less package to access the Browsers unpatched APIs.

To reduce lines of code we ship all common browser scheduling APIs as unpatched version directly.

As RxJS internally uses Browser APIs it is pretty impossible to get rid of the zone involvement. For this very reason we shipped the RxJS operators, schedulers and functions that would trigger zone as unpatched version.

It is possible to inject an instance of NgZone into components and services etc to tell Angular to run a specific piece of code outside of Angular.

The downside here is we need to inject NgZone and rely on dependency injection which is not only more code but also slow.

Zone configuration is a less granular way to disable zone. It helps to configure zone in a way where it don't patches specific APIs at all.

You can read in detail about it in the docs of @rx-angular/cdk/zone-configuration.